In 2020 OGAT documented 32 femicides. Of these, 4 were vicarious femicides (murders of women or minor children by a man as an instrument to cause harm to another woman).

In 2020, the Gender Observatory of Alas Tensas (OGAT) documented 32 femicides. Of these, 4 were vicarious femicides (murders of women or minor children by a man as an instrument to cause harm to another woman). 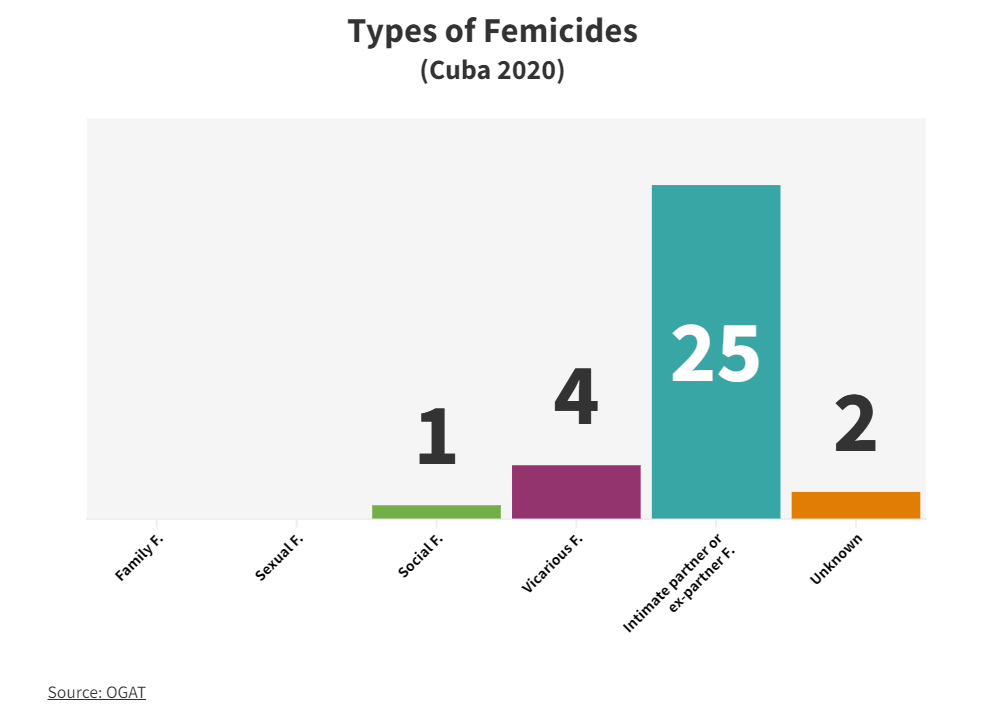 Relationship of the aggressor with the victim

According to the data analysis, in most cases (25) the perpetrators were partners or ex-partners of the victims (15 partners and 10 ex-partners respectively).

This data confirms that the main aggressors of women are not strangers, as is usually thought, but most of the time men very close to them.

It should also be added that the 4 vicarious feminicides (in this case they were 4 children) were also committed by partners or ex-partners of the mothers. 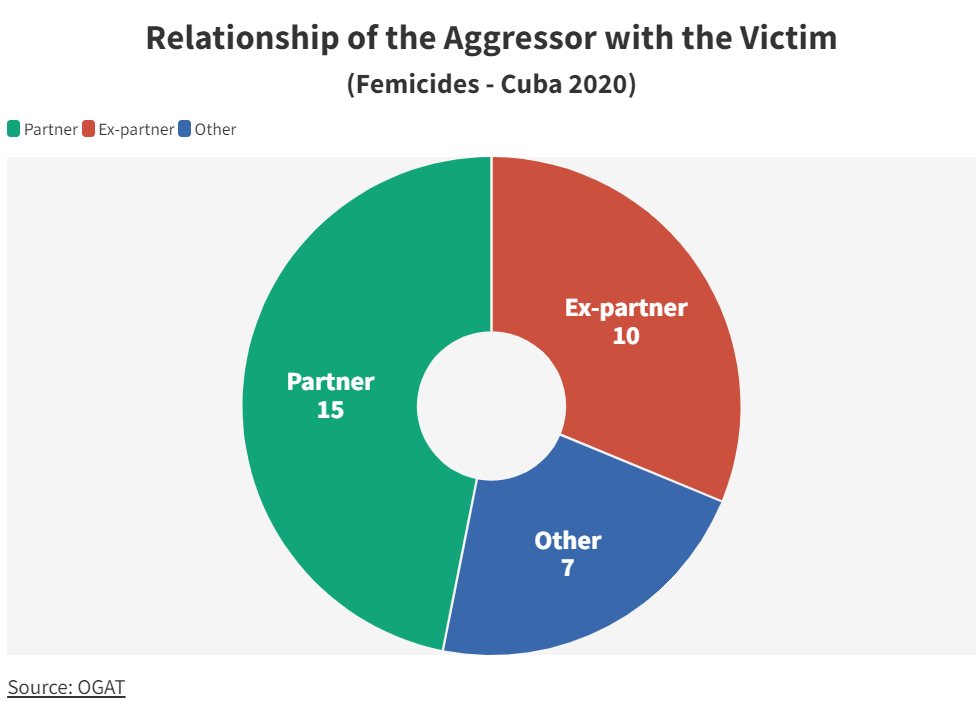 Furthermore, we found out that the provinces with the most cases of femicide were Havana (5), Las Tunas (5), Holguín (4) and Santiago de Cuba (4). 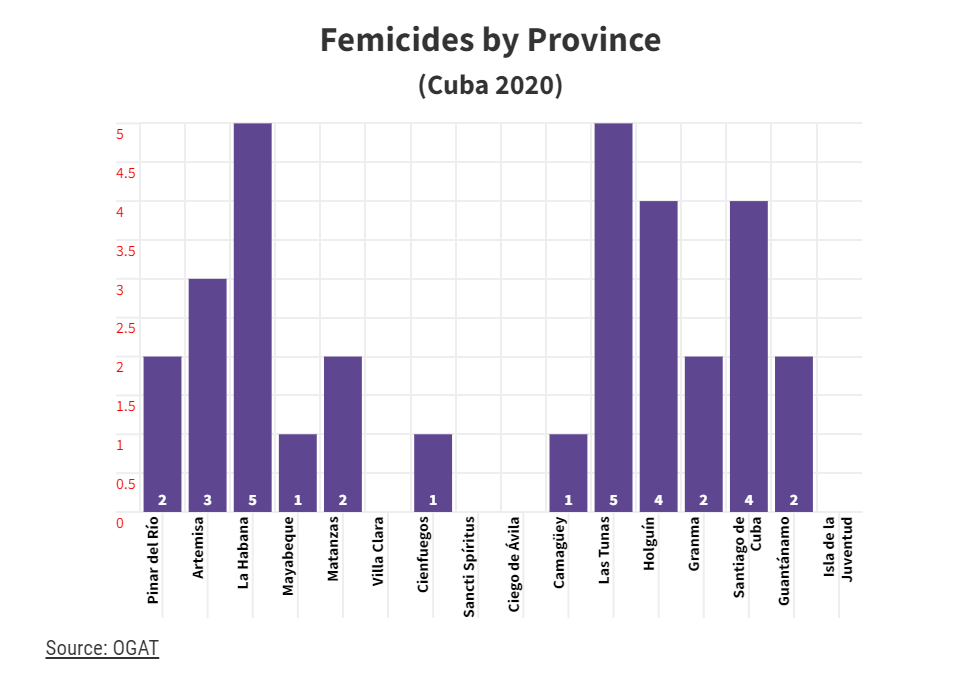 The months with the highest number of cases were December with 6 femicides, and August and November with 5 and 4 femicides respectively. 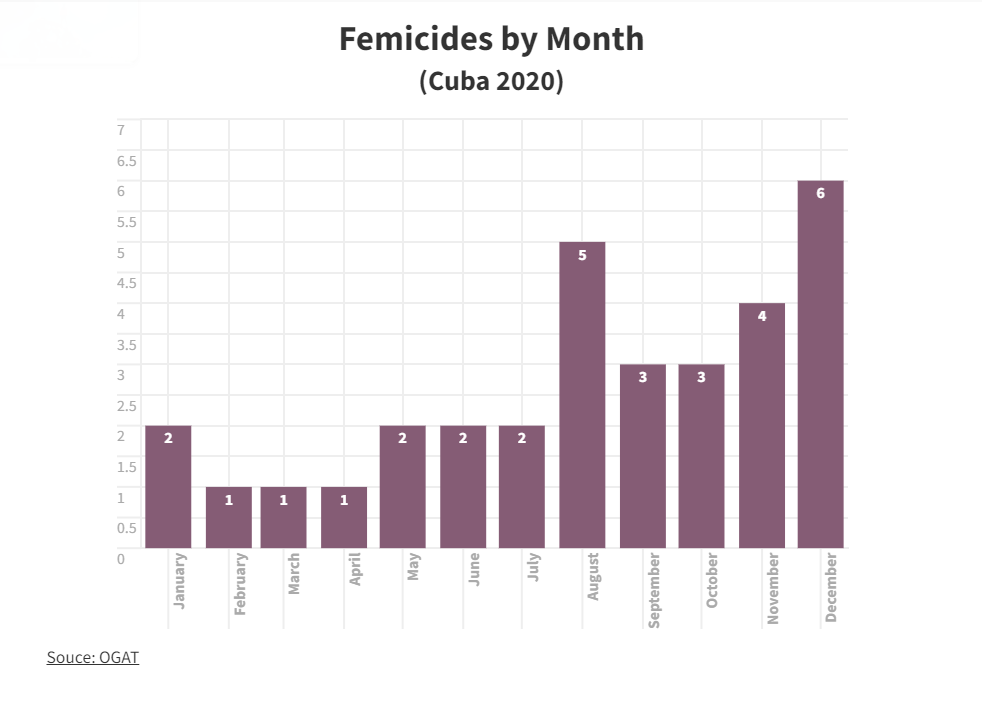 Places where femicides were perpetrated

Regarding the places where these femicides were committed, OGAT has documented that 12 were located inside thier homes and 11 in public places. For the others, the place could not be confirmed.

Although there is almost parity between public and private places, we stress that this does not mean that the crimes located in public spaces were committed by people outside the victims’ close circle. 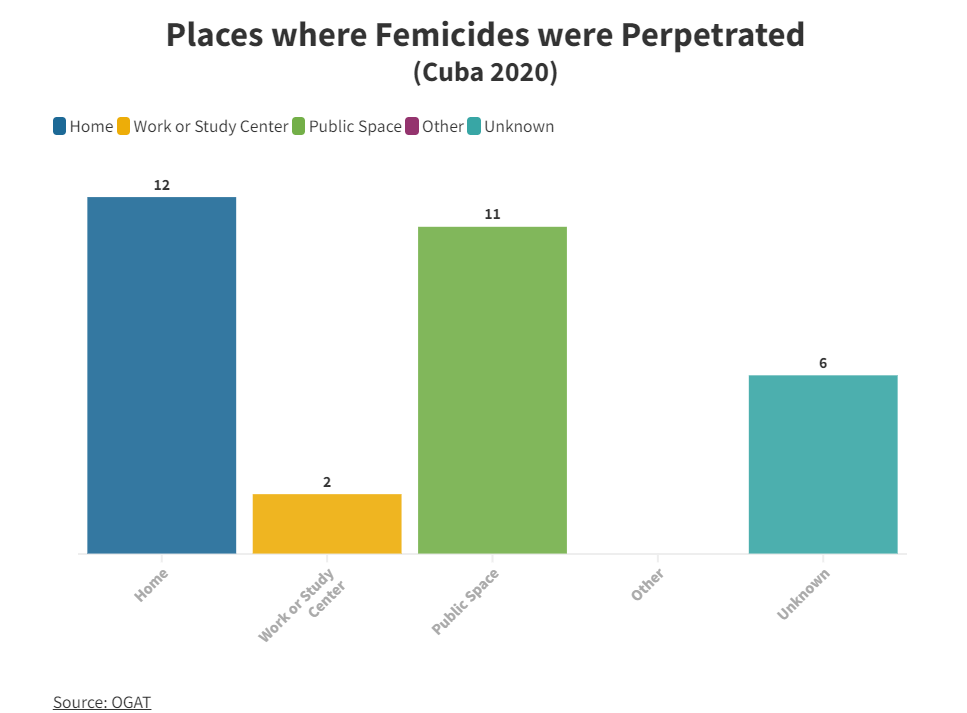 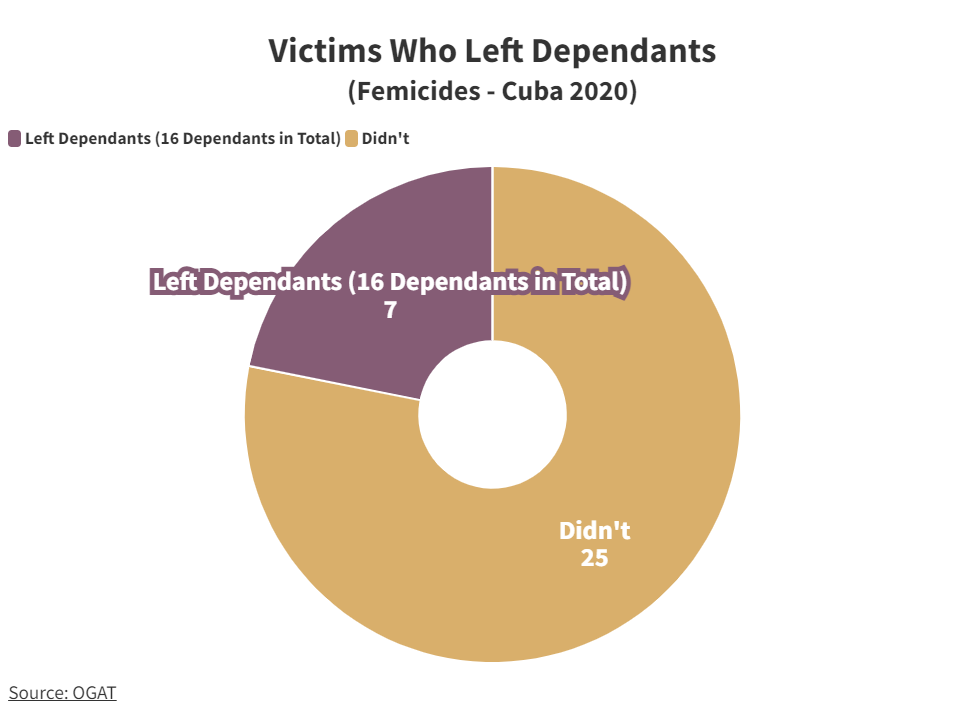 Aggressors with a history of gender/ based violence

In addition, it was possible to verify that six of the aggressors had a history of gender-based violence against women at the time of committing the femicide. 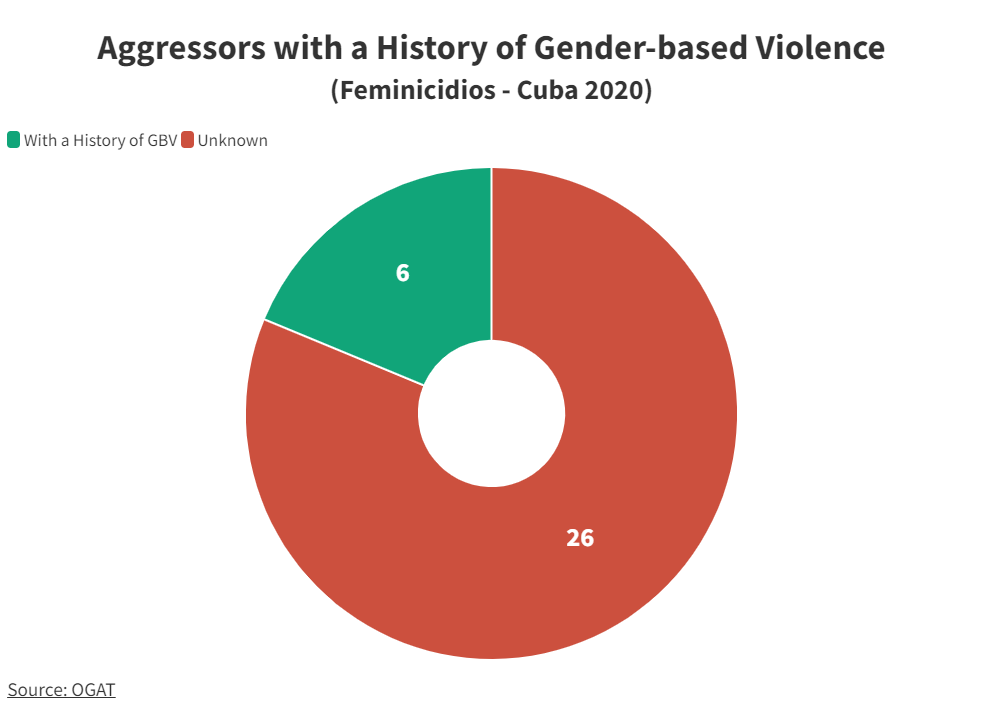 In 2020, the Cuban population consisted of 5,627,547 women according to ONEI (National Office of Statistics and Information).

Therefore, according to our comparative data, the rate that year was 0.56 femicides per 100,000 women. To give us an idea, this means that in Cuba 1 feminicide occurred every 11 days.

Femicide, acording to UN Women, refers to the intentional murder of women because they are women, but may be defined more broadly to include any killings of women or girls.

Femicide differs from male homicide in specific ways. For example, most cases of femicide are committed by partners or ex-partners, and involve ongoing abuse in the home, threats or intimidation, sexual violence or situations where women have less power or fewer resources than their partner.

Femicide represents the most extreme form of violence against women and is the most visible manifestation of a phenomenon of widespread and systematic violence and brutality, culturally accepted, rooted in centuries of discrimination and inequality between men and women.

OGAT documents femicides according to the methodology announced by the Spanish Ministry of Equality in December 2021 and used in Spain since 2022, as it is considered the most complete and comprehensive intrument to record femicides.

This methodology documents 5 types of femicides:

Family femicide. Murder of a woman by male family members.

Sexual femicide. Murder of a woman by a man without a partner or family relationship and linked to sexual violence. Also femicides related to sexual exploitation, trafficking or prostitution. Also female genital mutilation or forced marriage.

Social femicide. Murder of a woman as a result of a non-sexual assault by a non-partnered, non-family man (stranger, co-worker, neighbour, friend, employer, etc.).

Vicarious femicide. Murder of a woman or minor children by a man as an instrument to cause harm to another woman. Only women and minors (boys and girls) are included. Vicarious femicide has two subtypes: 1) It takes place within the sphere of the partner or ex-partner (minor children, but also other minors and women of legal age who are close to them: nephews, friends, sisters…) and 2) It takes place outside this sphere (murder of minors or women with the intention of harming another woman).

Although in 2020 this femicide registration system did not yet exist, OGAT has used it to analyse its data on femicides from 2020 to get a more comprehensive picture of gender-related killings on the island.

Limitations in the documentation work

In Cuba, there are no governmental observatories or regular and rigorous figures on femicides in the country.

OGAT has obtained and/or contrasted data on femicides through its network of observers, community sources, independent media, denunciations in social networks and alliances with other independent platforms such as Yo Sí te Creo en Cuba and Red Femenina de Cuba.

Despite the constant and rigorous work of all of them, there are limitations in the documentation work (limited resources, criminalisation by the government of independent activities) that lead us to affirm that the figures presented constitute an underreporting of the murders committed by gender-based violence against women in Cuba.

In 2019, the final report of the National Survey on Gender Equality in Cuba, carried out in 2016, has yielded the first figures on gender-based violence in Cuba, but only within the couple. Of the 10,698 women interviewed, 26.7 % said they had been abused in some way in the 12 months prior to the survey.

Without specifying how the Cuban government defines femicide, the report states that: “the femicide rate was 0.99 per 100,000 inhabitants of the female population aged 15 and over in the country“.

Based on this data, the calculation made by the IPS news agency, which has a notable gender perspective, is that the number of women killed by gender-based violence could have been around 50 in 2016, which is a high number if you look at the number of inhabitants and compare it with other countries.

However, less conservative media speak of more than 100 cases of murdered women per year. Unfortunately, as we do not have access to the statistics, it is not possible to clarify the number of women killed by gender-based violence, but it is verifiable that every year since 2000, and without variation, there were between 500 and 600 violent deaths in the country, considered homicides, where traffic accidents are not included.

It would be necessary to know how many of these murdered people are women. The number does not seem to be negligible.

On the other hand, and with more recent data, the 2019 Health Statistical Annual Report shows that assaults are among the 35 leading causes of death on the island. And it states that in that year 105 women died as a result of this cause.

Inaccurate nomenclatures such as “aggression“, in which femicide can coexist with other violent acts, only contributes to making invisible a latent problem in Cuban society. It also exposes the legal loopholes in the system.

Situation of vulnerability for Cuban women

Faced with this situation of vulnerability for Cuban women, on November 2019 a group of 40 Cuban women from different professions launched the largest independent initiative to date against violence against women in Cuba: The Request for a comprehensive law against gender-based violence in Cuba, addressed to the National Assembly.

Based on Cuban law, on the timid steps taken by the Cuban government to address gender-based violence in the country, and on international trends, the request called for a law that “should not only punish crimes —its purpose should not only be punitive—.

But also create the basis for implementing a comprehensive system of prevention and care that educates citizens in a life without gender-based violence, guarantees access to justice, preserves women’s lives, considers the need for shelters and safe houses for victims, and builds awareness programmes for women, aggressors, institutions and society as a whole.

Rejected in its first attempt to reach the Legislative Assembly, we cannot yet know the scope that this petition will have, but it is undoubtedly another sign that feminist movement is finally moving something in Cuba, and reveals the fundamental role that social networks (in particular Facebook) are playing as a space for Cuban women (inside and outside the island) to meet and gather, and to make femicides and other violence against women visible.

On the other hand, the absence of shelters in Cuba places women victims of gender-based violence in a situation of greater vulnerability. Many of them have to live with their aggressors because they are economically dependent on them and/or do not have a support network to help them, or because they feel coerced or threatened.

In the Model of Care in Shelters for Women Experiencing Violence, which was published in 2012 in Ecuador by the five shelters existing at that time in the country (Casa Amiga, Casa Hogar de Nazareth, Casa María Amor, Casa Matilde, Casa Paula), shelters are defined as follows:

“Shelters save lives. The primary role of the houses is to shelter women who are experiencing violence and urgently need a place to be safe. They are temporary homes that provide protection, security and comprehensive care for women and their children affected by gender-based violence in the family, with the aim of contributing to their autonomy and the exercise of a life of dignity free from violence. For women who do not have support networks, shelters are essential to protect them from violence and social pressures. It is in this space of security and peace that the first dreams of a life free from violence can be born, and processes of autonomy and empowerment can begin“.

Faced with the long period of confinement caused by the COVID-19 coronavirus, different international organisations such as UN Women established protocols to deal with the health crisis, after noting that: “in emergency contexts, the risks of violence against women and girls increase, especially domestic violence, due to increased tensions in the home and may also increase women’s isolation”.

Because of this, it has suggested including shelters and helplines among the essential services that should be fully accessible. However, the Cuban government has so far failed to implement and publicly discuss the urgency of these safe places, which has become one of the main demands of civil society and feminist activists.

Another issue that has concerned OGAT is the criminalisation of any kind of mobilisation or citizen activism. Not only with the signing of Decree Laws such as 370, but also with evictions, cyber-harassment, defamation in the official press, and threats to gender-based violence observers and relatives of victims of femicide.