Of the 36 femicides verified in 2021, 29 were committed by partners or ex-partners of the victims, which dismantles the false belief that the greatest danger for Cuban women comes from outside the family and from unknown men.

According to the data collected by the Gender Observatory of Alas Tensas (OGAT), the number of femicides in Cuba increased in 2021, with 36 documented femicides compared to 32 in 2020 (4 of these 32 were vicarious femicides).

Of the 36 femicides verified in 2021, 29 were committed by partners or ex-partners of the victims. We insist on this significant fact, which dismantles the false belief that the greatest danger for Cuban women comes from outside the family and from unknown men.

On the contrary, the aggressor is generally the partner or ex-partner, who has often engaged in violent or possessive behaviour before ending the victim’s life.

With regard to the aggressor’s status as partner or ex-partner at the time of the murder, the numbers are practically equal, as 15 perpetrators were partners and 13 were ex-partners. 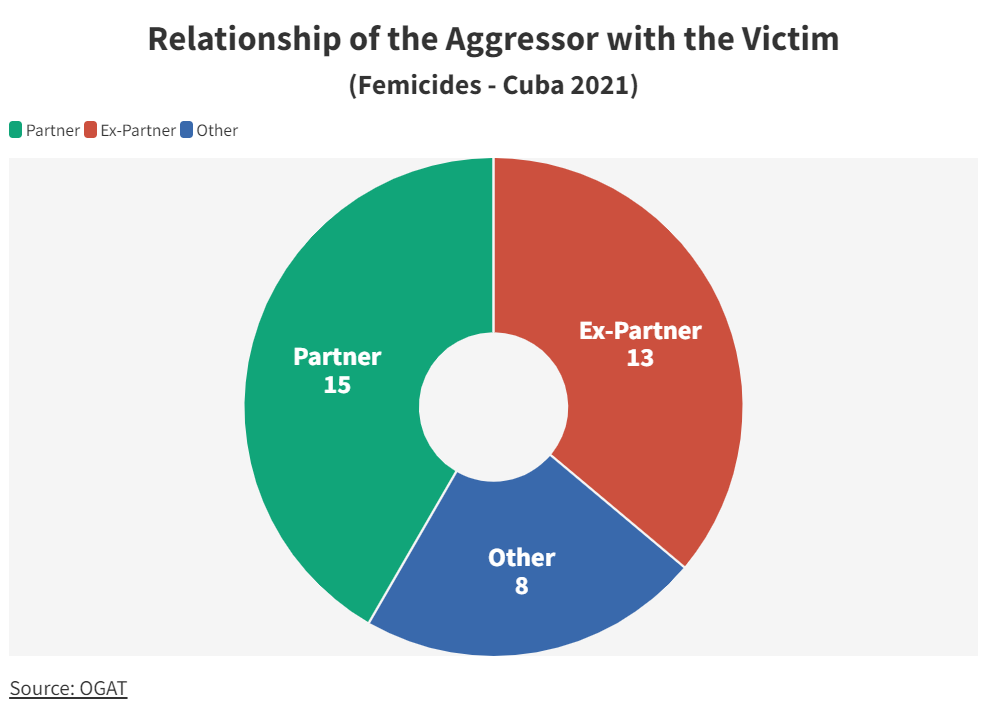 In addition, 5 murders were classified as social femicides, 1 as sexual, and this year, unlike in 2020, no vicarious femicides were recorded. 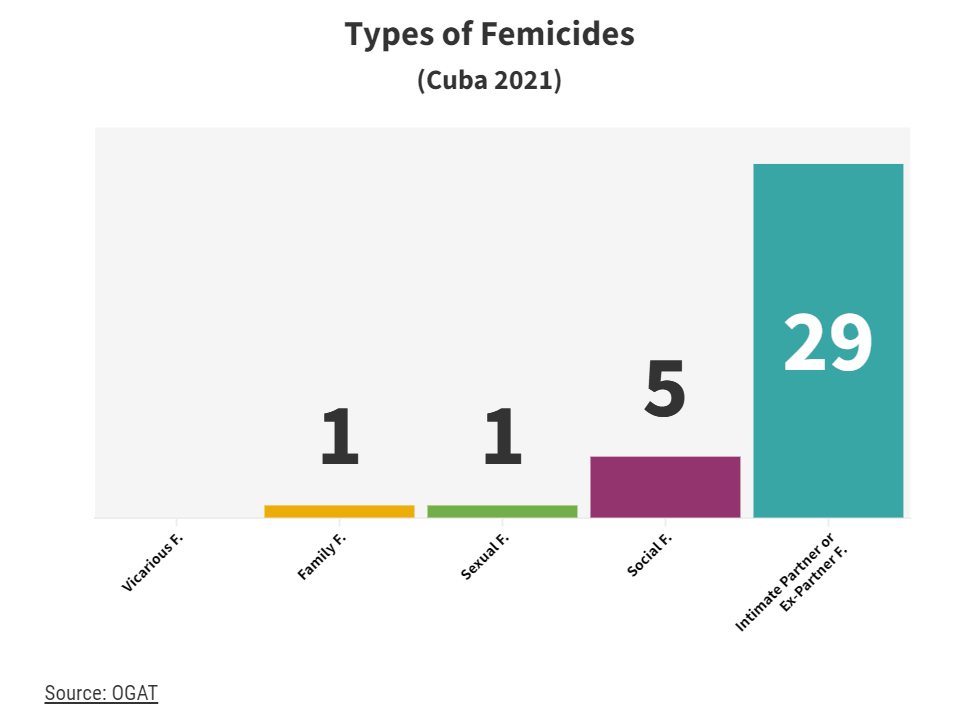 Geographical distribution of the killings

Havana, the capital of the country and the most densely populated province, tops the list, followed by the provinces of Pinar del Río and Holguín. 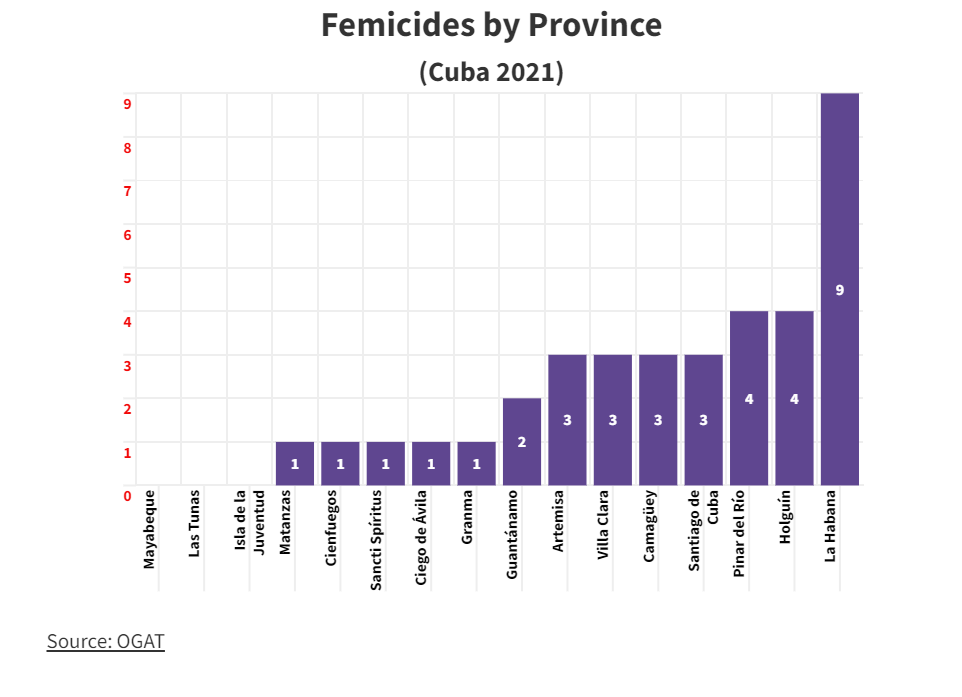 Places where femicides were perpetrated

Regarding the spatial location of the femicides, we were able to verify that 12 occurred inside the homes of the victims and 6 in public spaces (mainly on public roads), while there were 15 assaults in places that OGAT could not determine with total certainty. 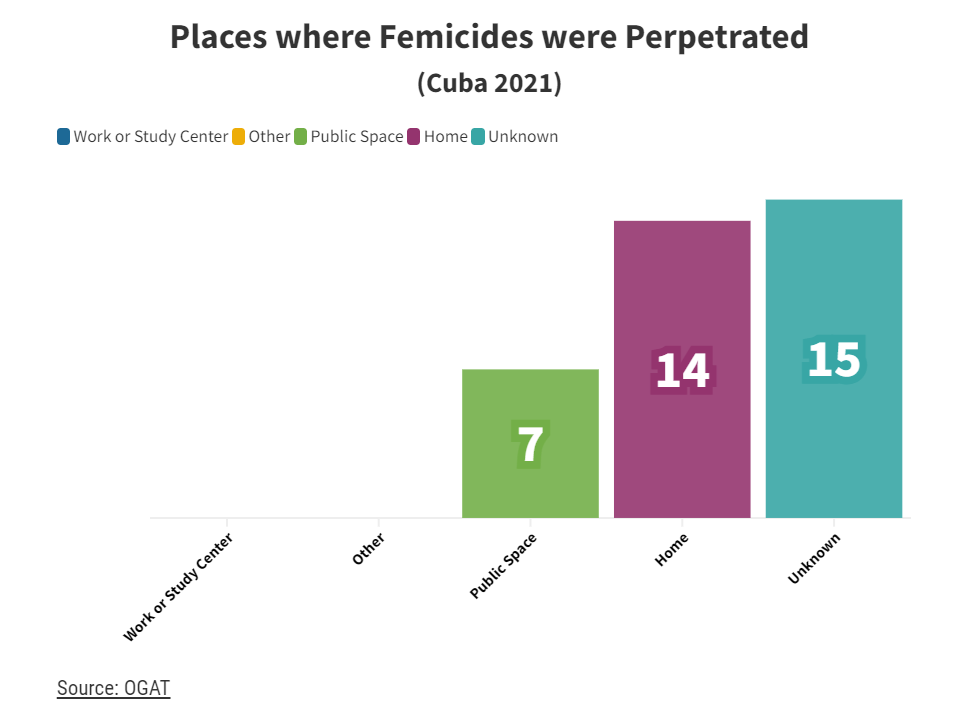 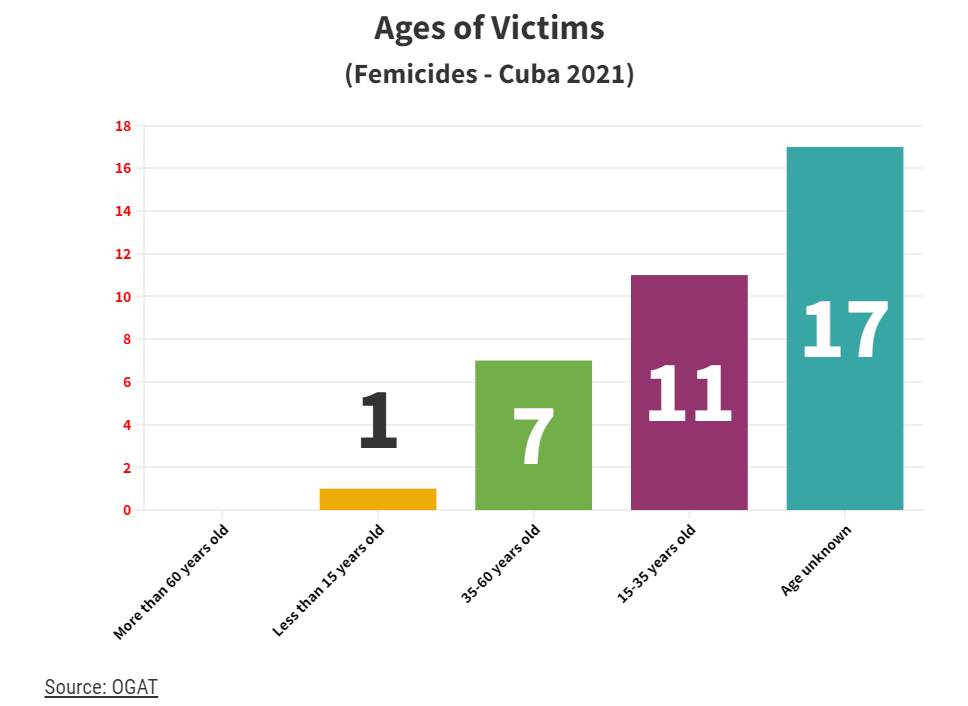 It is important to highight that femicides do not only affect the murdered women, but also have an impact on entire families, with sometimes dramatic consequences for the dependants of the murdered woman, such as her minor children or elderly parents under her care. These data are also collected by OGAT.

Among the 36 victims in 2021, at least 19 women were found to have left dependants. The total number of those who suddenly lost the support of these women was 30 dependants, especially children. 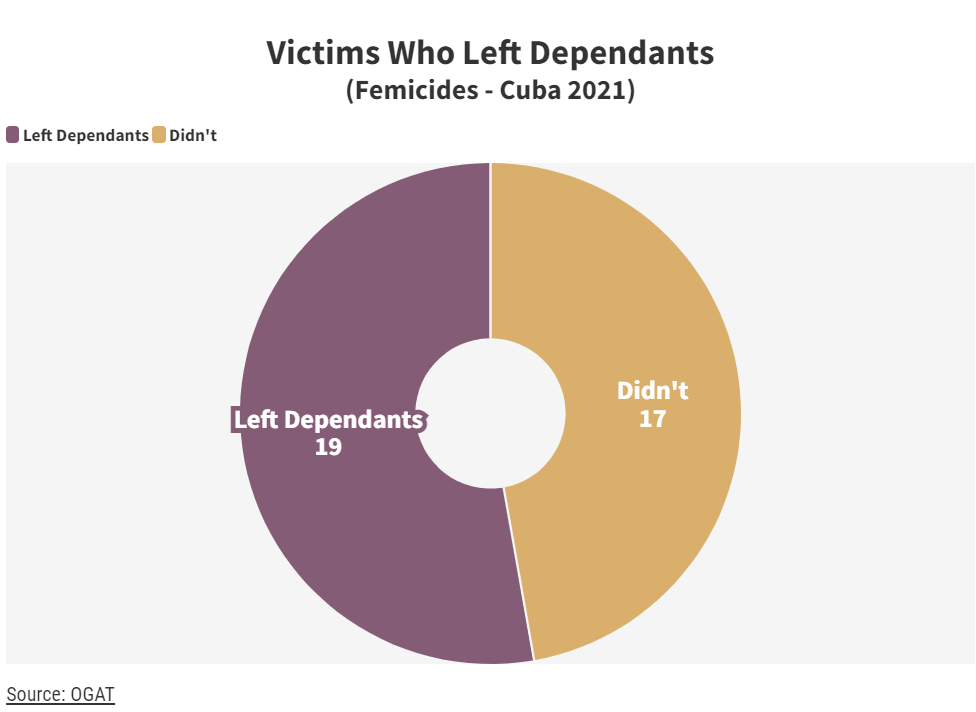 Aggresors with a history of gender- based violence

Despite the difficulties posed by the lack of transparency of police and legal bodies in Cuba, OGAT always tries to verify each aggressor’s history of gender-based violence and the existence of previous complaints.

For 2021, OGAT found that 8 of the aggressors already had a history of gender-based violence, including previous complaints in some cases. For the remaining 28 femicides, this information could not be confirmed. 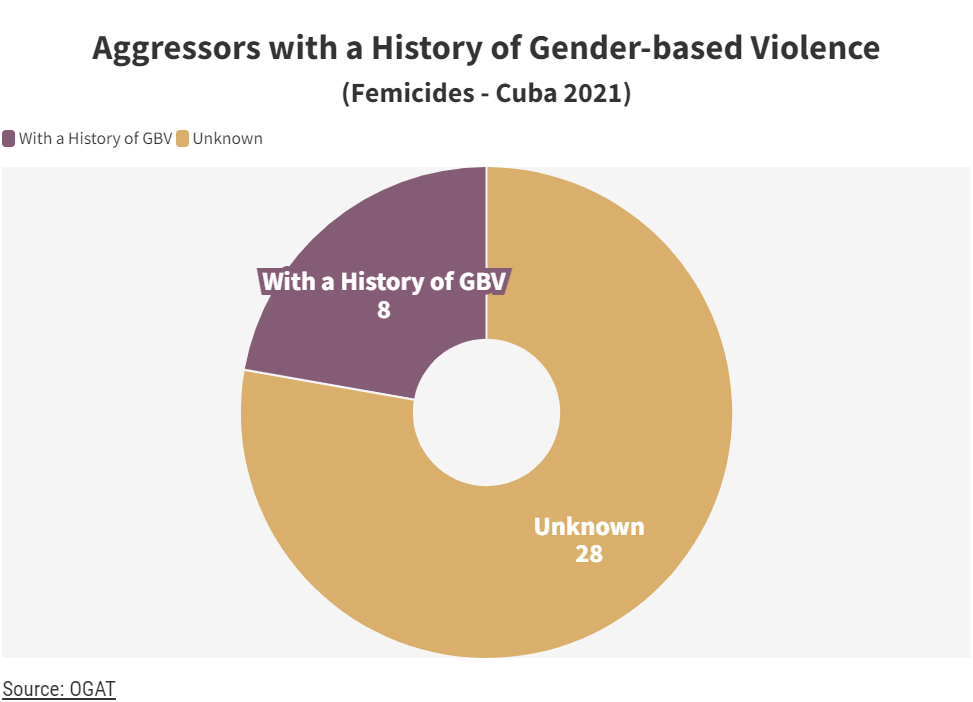 In addition to the 36 verified femicides, four other non-verified cases were also registered, which correspond to women who probably suffered a violent death, but which are more complicated to classify as femicides because they are part of unresolved police investigations or because of the lack of access to expert reports.

For example, this is the case of Yaumara Bedey Rodríguez (36 years old), who was found drowned with signs of aggression in El Puerto de los chinos, in the bay of Santiago de Cuba.

It is also the case of young Diane Díaz Santana (18), who died of a gunshot wound to the chest on 11th February in Artemisa, and the suspect was a 44 year old man with whom she was romantically involved.

In Diane’s case, the authorities ruled it a suicide, although the family has contested this ruling.

Femicide, acording to UN Women, refers to the intentional murder of women because they are women, but may be defined more broadly to include any killings of women or girls.

Femicide differs from male homicide in specific ways. For example, most cases of femicide are committed by partners or ex-partners, and involve ongoing abuse in the home, threats or intimidation, sexual violence or situations where women have less power or fewer resources than their partner.

Femicide represents the most extreme form of violence against women and is the most visible manifestation of a phenomenon of widespread and systematic violence and brutality, culturally accepted, rooted in centuries of discrimination and inequality between men and women.

OGAT documents femicides according to the methodology announced by the Spanish Ministry of Equality in December 2021 and used in Spain since 2022, as it is considered the most complete and comprehensive intrument to record femicides. This methodology documents 5 types of femicides:

Family femicide. Murder of a woman by male family members.

Sexual femicide. Murder of a woman by a man without a partner or family relationship and linked to sexual violence. Also femicides related to sexual exploitation, trafficking or prostitution. Also female genital mutilation or forced marriage.

Social femicide. Murder of a woman as a result of a non-sexual assault by a non-partnered, non-family man (stranger, co-worker, neighbour, friend, employer, etc.).

Vicarious femicide. Murder of a woman or minor children by a man as an instrument to cause harm to another woman. Only women and minors (boys and girls) are included. Vicarious femicide has two subtypes: that which takes place within the sphere of the partner or ex-partner (minor children, but also other minors and women of legal age who are close to them: nephews, friends, sisters…) and that which takes place outside this sphere (murder of minors or women with the intention of harming another woman).

Although in 2020 this femicide registration system did not yet exist, OGAT has used it to analyse its data on femicides from 2020 get a more comprehensive picture of gender-related killings on the island.

We highlight the importance of the typology of social feminicide, which manages to name as feminicide some violent deaths of women with a misogynist character that were not previously taken into account because there was no previous relationship with the victim or confirmed sexual aggression.

The aim of this typology is to count gender related killings of women with greater accuracy and justice, so that none of their manifestations are left out.

The statistics we offer come from our network of observers as well as from the collaboration with other independent feminist platforms, such as Yo Sí Te Creo en Cuba and the Red Femenina de Cuba, all of them working on very limited resources and often criminalised by the government.

Because of this, we know we are dealing with a much lower number than the number of femicides that have been committed in Cuba since we started to document them. This is why we insist that it is only an under-registration.

In adittion, femicide is not typified in the criminal code, there are no shelters for women, there are no public awareness campaigns, there are no updated official statistics on femicides. All feminist activism related to gender-based violence or other social issues affecting women is criminalized.

In 2021 the Cuban government showed more political will in the fight against gender-based violence with the signing of the National Program for the Advancement of Women (PAM), as well as the Agreement 9231/2021: “Comprehensive Strategy for Prevention and Attention to Gender Violence and in the Family Scenario”.

However, neither of these two legislations constitutes a comprehensive Law, such as the one claimed since 2019, nor is the action of women and their independent associations as subjects of social change supported in any sense, especially the right for women to free participating in politics.

The government in Havana has not yet solved the lack of updated statistics on femicides. Although Teresa Amarelle, secretary general of the Federation of Cuban Women, announced at a press conference in March 2021 the creation of an official observatory of gender which would include records of femicides and other expressions of gender-based violence, so far there is no sign that it is working.

It is of concern that in Cuba no shelters or safe houses for victims of gender-based violence have been implemented, which has been one of the main recommendations of organizations such as UN Women.

In Cuba, only one helpline has been implemented, number 103, and it occurred recently, in December 2020. Regarding this helpline, in June 2021, its coordinator Giovani Leal Duque, in a round table broadcast on Cuban television said:

“in this last year about 21,000 calls have been received to the line, of which 4% (a relatively insignificant number compared to other issues) are related to this issue of [gender-based] violence”.

Femicide is not typified in the new Penal Code

Although OGAT and other Cuban civil society organizations at the time welcomed the implementation of this helpline, we continue to criticize the fact that it is not exclusive to cases of gender-based violence and encompasses other social problems, such as drug addiction.

Femicide is not typified in the new Penal Code of 2022. However, gender-based violence constitutes for the first time in the text an aggravating circumstance or qualification for different crimes.

Although the Cuban government has signed international conventions such as the Convention on the Elimination of All Forms of Discrimination against Women (CEDAW), where it commits, among other things, to “adopt appropriate legislative and other measures, with appropriate penalties, prohibiting all discrimination against women”, the State has not yet acted consistently with this.

In fact, the government has directly violated these international agreements by engaging in acts of discrimination against women for political reasons. This is evidenced by acts of repudiation, police surveillance, cell phone cuts, prohibitions on leaving the country, banishments, house and arbitrary arrests, and the imposition of criminal sanctions on countless peaceful demonstrators (especially in the wake of the social outbreak of July 11).

OGAT, in conjunction with the monitoring of femicides, and as part of prevention and awareness-raising actions, has been developing the campaign “Cuban Women Participating in Politics“. This initiative makes visible the situation of women political prisoners, activists and all Cuban citizens who have been repressed for exercising their right to freedom of expression.

It is currently considered that there are 73 women prisoners in Cuba for political reasons, of which 67 were imprisoned after the social outburst of July 11, others detained or harassed during the peaceful convocation of 15N, according to data provided by civil organizations such as Justicia 11J and Cubalex (these are only sub-registers, since there is no access to official data).

For its part, the organization Prisoners Defenders reports 1007 political prisoners, of whom 130 are women, including 33 minors, among whom 4 are girls.

At OGAT we continue to demand a Comprehensive Law against Gender Violence, the criminalization of femicide in the Penal Code and the creation of an official registry of femicides. It is also of utmost importance that the right of association, assembly and demonstration be formally recognized, as well as freedom of the press.